Rhino conservation history has been made at Care for Wild Rhino Sanctuary with the arrival of a southern white rhino calf born to orphaned rhinos Wyntir and Storm.
8-year-old orphan Wyntir gave birth to a healthy baby girl at 02:25 on Sunday 13th February 2022. This miracle baby is the world’s first rhino calf whose parents were both orphaned due to poaching, and who was conceived and delivered naturally.
It was a monumental and emotional moment for Care for Wild’s Founder and CEO Petronel Nieuwoudt, and the Care for Wild team who run the world’s largest orphaned rhino sanctuary and specialise in the rescue, rehabilitation, release, and ongoing protection of this iconic and endangered species.

Wyntir was just 2 months old and weighed 107kg, when she was rescued from Kingfisherspruit in the Kruger National Park after poachers murdered her mother. Alone and defenceless, Wyntir was attacked by hyenas who ripped off her ears and caused severe wounds. Wyntir’s name is a pure reflection of the hardship she endured and her struggle for survival.
Storm was orphaned in the Limpopo area just over 10 years ago in an equally devastating attack when poachers brutally murdered his entire family and left the 4-week-old calf to die.
Both Wyntir and Storm were rescued and brought to Care for Wild Rhino Sanctuary. They are 2 calves of over 100 rhino orphans that have been rescued since the conservation project began in 2011.

The rhino species is estimated be less than 10 years away from extinction and South Africa is at the centre of the rhino poaching war. The Kruger National Park has seen a decline in white rhino populations of 75% since 2011. In 2014 SANParks joined forces with Care for Wild Rhino Sanctuary and created a Memorandum of Understanding to safeguard this heritage and the future of the species by rescuing and protecting the orphans left behind.
Wyntir and Storm underwent extensive care and rehabilitation before entering the rewilding and release programme. All rhinos who are released back into a natural ecosystem continue to be protected 24/7 by guards, as well as an elite K9 and Mounted Unit.
Wyntir and Storm have become the rhinos they were always supposed to be and have just secured the future of their species.

“I look at both Wyntir and Storm and all in one moment I see their whole journey. Every second of struggle, every hour of effort, every sacrifice and every person who gave everything to save them. Care for Wild’s vision is to secure the future of the species through viable black and white rhino breeding populations protected by communities. This baby is a symbol of the life and light that is possible. She is hope for the species and for humanity. Rhinos belong to the world and it is all of our responsibility to save them.’ Petronel Nieuwoudt
This is just the beginning as more orphaned rhinos are expected to give birth soon.

Save rhinos, to save people, to save tomorrow. 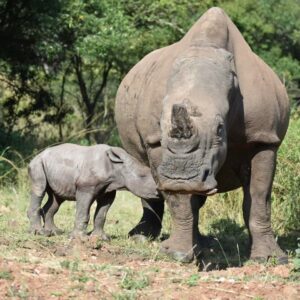