Home / Our Stories/ Bless the Rains!

November has been a busy month for the team here at Care for Wild Rhino Sanctuary. A few weeks ago, after heavy rains and storms, Rhino Monitors found a zebra foal alone and collapsed on the reserve. Just a few days old, she was brought to the ICU where she later received a blood transfusion to combat severe anaemia. Then, on the 24th November, we received another rhino orphan. A critically endangered, black rhino bull estimated to be around 14 months old. On the 1st December we received another rhino calf. This time, a 4 week old white rhino bull, who currently remains in the Intensive Care Unit. Every animal and every species has an important role to play in the ecosystem. From the zebra to the black rhino and white rhino, every species matters.
November has brought a lot of rain and we are so grateful! Whilst the rain might make cleaning bomas, driving the tractors and fixing the roads quite a challenge…the rhinos absolutely love it! Between grazing on the lush new grasses, Grey, Jemu, Spirit, Lilli and Zac have spent most of the month lazing around in massive mud pools! As well as being a method for regulating their body temperature and as very effective protection from the sun, the mud also helps protect from biting parasites which is particularly important at this humid and tropical time of year. Plus it makes them so happy! 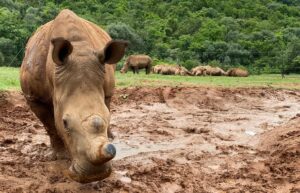